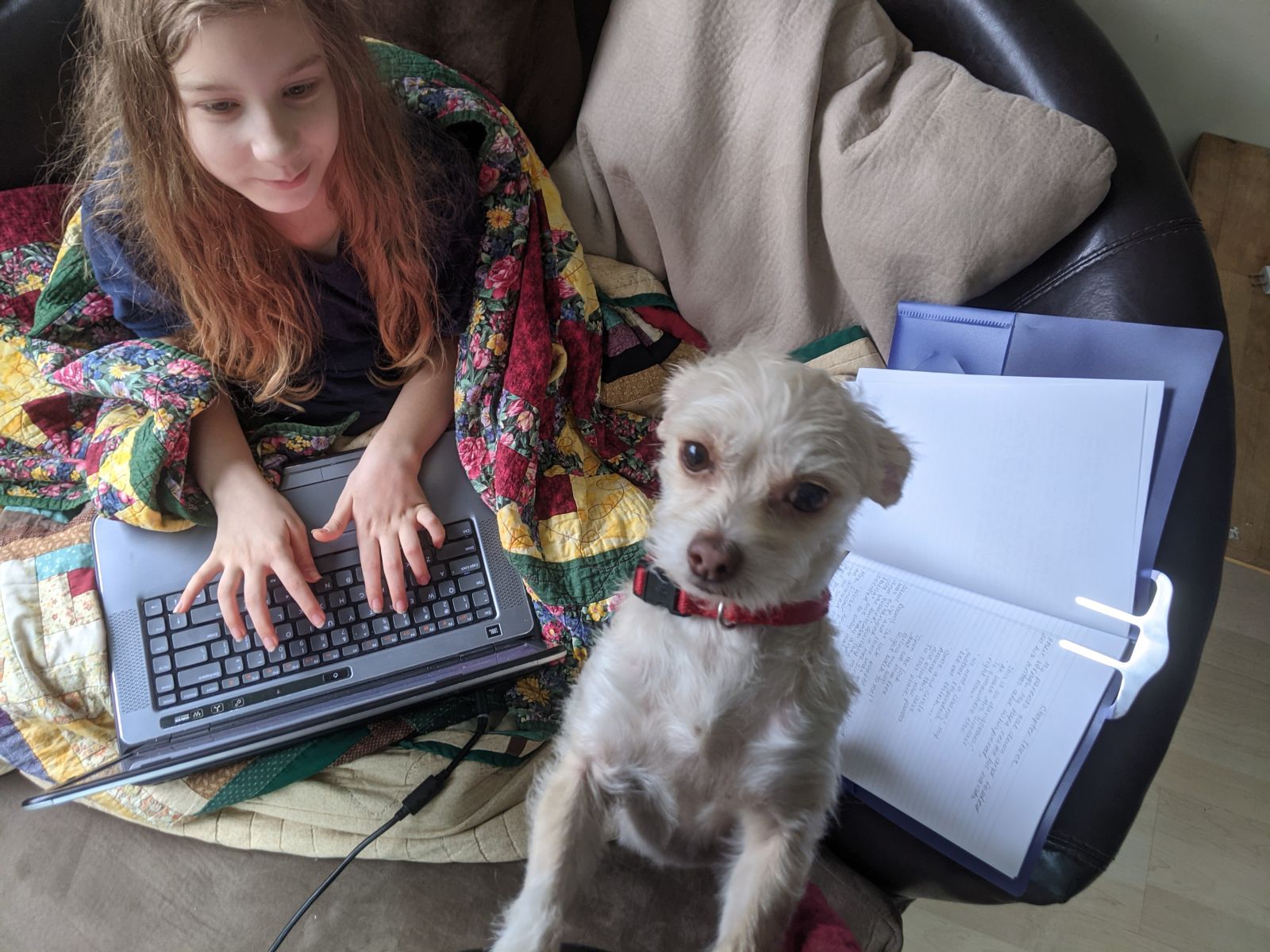 Families have different ways of recognizing their children’s coming of age. For the Pine family, they give their kids a series of special challenges to demonstrate their growing capabilities. Following this, the children choose one special challenge for themselves. For the Pines’ two oldest kids, it was navigating the bus system independently, doing odd jobs for a neighbor to earn money, learning to solve a Rubik’s cube, and ordering food from a restaurant independently. Their youngest, however, had a different idea.

Apl Ina (pronounced “Apple”) recently turned 12, and there was no question what she wanted: an animal to care for. She needed a smaller dog who’s socially oriented to humans and would be a good companion to Wobbly, the family’s 19-year-old cat, and their 4 pet rats: Coffee, Bean, Sprinkles, and Cupcake.

Katy, Apl’s mother, knew exactly where to look to find a suitable companion. She and her two oldest children, C (pronounced “sea”) and Ruby, all volunteer as socializers at Animal Aid and also help refresh the bird feeders around the shelter. Katy called Joe, the shelter’s Animal Care Manager, for advice on finding a dog who would be a good fit for their family, and “I had a great conversation with him about it,” she said. More discussions followed, where Joe shared the news about Rita, a new arrival to Animal Aid’s canine foster program.

Rita is a sweet 12-pound terrier, approximately five years old, with a delicate face and short nose. Her background is a mystery, as she was found as a stray by Multnomah County Animal Services before being transferred into Animal Aid’s care.

Katy’s biggest concern was whether Rita would get along with her three kids and Wobbly, so the family started out by hosting Rita as a foster dog. Wobbly and Rita “mostly politely ignore each other,” Katy said. “They sit next to each other on the couch but look the other way.” It only took a weekend for the Pines to feel that Rita was home. 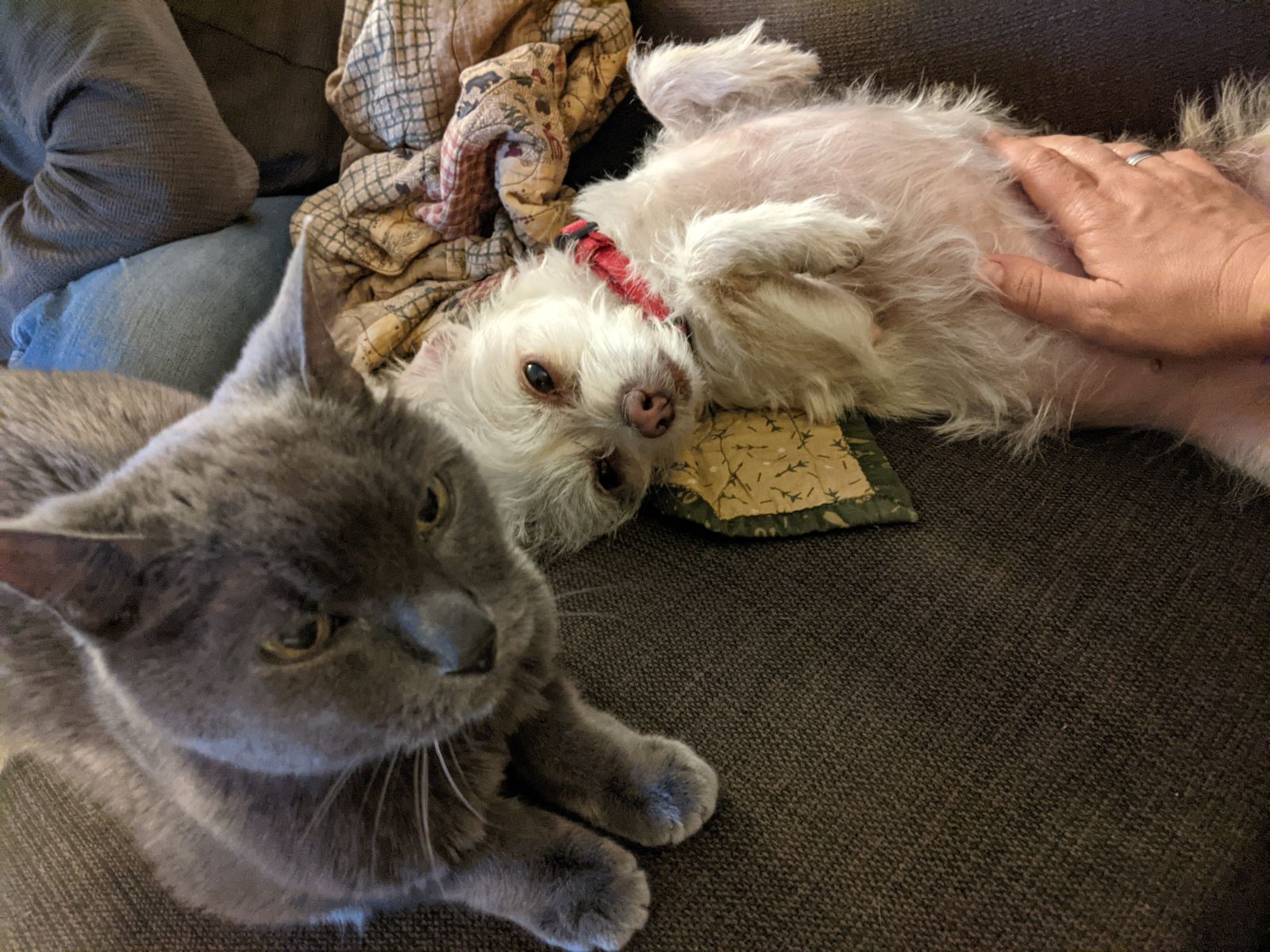 After Rita settled in and was officially adopted in February, Apl changed her name to Ginger. The dog’s nails clicking on the floor reminded Katy of Ginger Rogers, the famous tap dancer. When Katy showed Apl some YouTube videos of Ginger Rogers’ dancing, Apl liked the name, too.

Ginger is “very active but not puppy-like,” Katy said. “She’s very well behaved. Apl has been doing a great job taking care of her.”

Apl feeds Ginger and gives her a bath once a week. “Ginger doesn’t really like showers,” Katy said, so Apl takes showers with Ginger in their enclosed shower. Having Apl in the shower with Ginger makes Ginger more comfortable.

Ginger has a few quirky routines. In the morning, she loves to put her front legs on Apl and stretch into a cobra pose that reminds Katy of the white dragon from The NeverEnding Story. When Ginger grooms herself on the bed, she often licks the pillows instead of her paws. When Apl bends down to scoop Ginger’s food, Ginger sometimes jumps forward and leans on Apl, knocking her over in excitement. And when Katie works in the garden, Ginger loves to lay on the porch with her legs stretched all the way out, “like frog legs.”

Although Ginger is very well behaved, she’s a work-in-progress in one area: “Our house is set back from the street, so she doesn’t have opportunities to bark at passersby,” Katy said, “but it’s still a challenge when we go on walks. We try to be reassuring and let her know that there’s nothing to worry about—the humans have everything under control.” If all else fails, they’ll cross the street and go in the other direction.

Katy is thankful to have given Ginger a home.

“I’m so grateful for Joe’s guidance and expertise about matching us with Ginger. He’s good about taking both the human and animal needs into account. I noticed this from overhearing conversations with him and others,” she said. “I love the Animal Aid community and being a part of it.”

But the best part, Apl added, is giving Ginger people she can place her paws on while she’s sleeping. 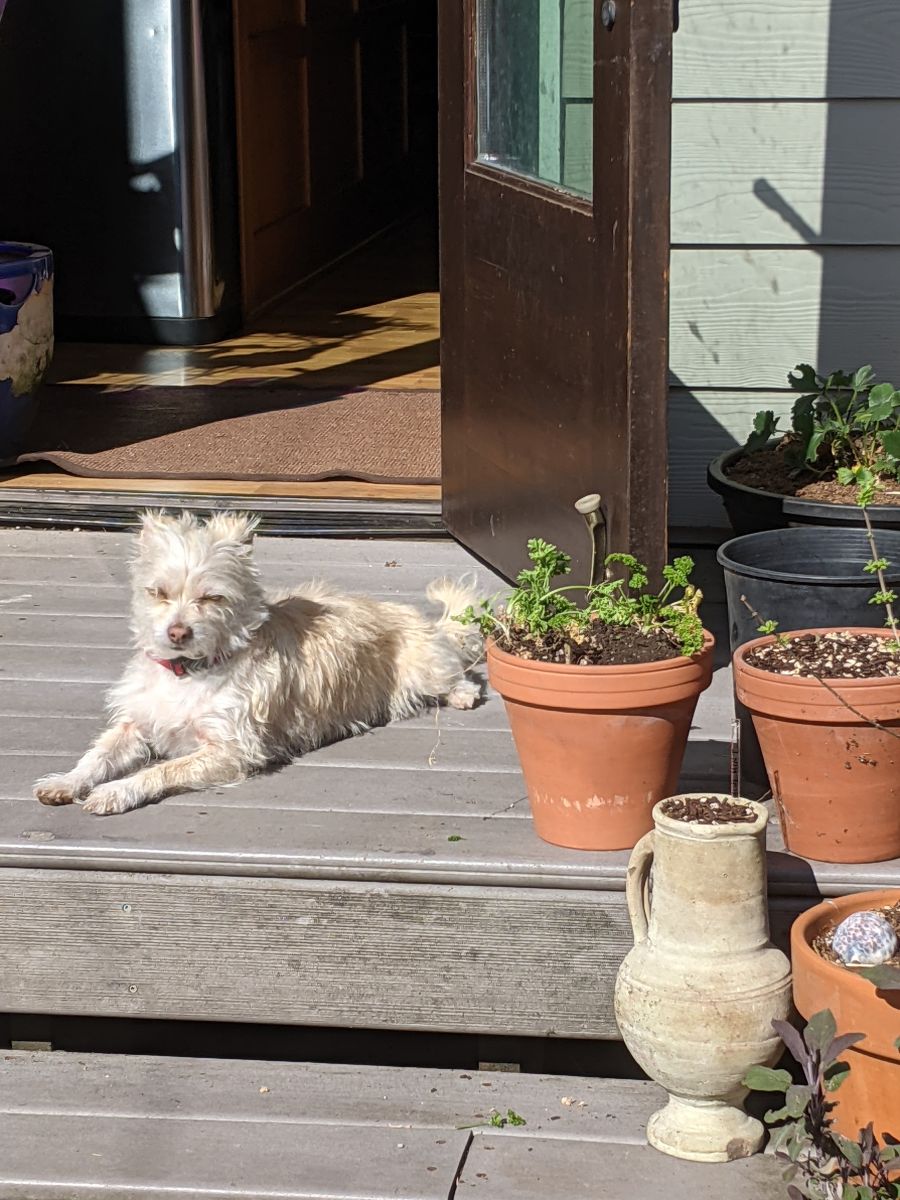 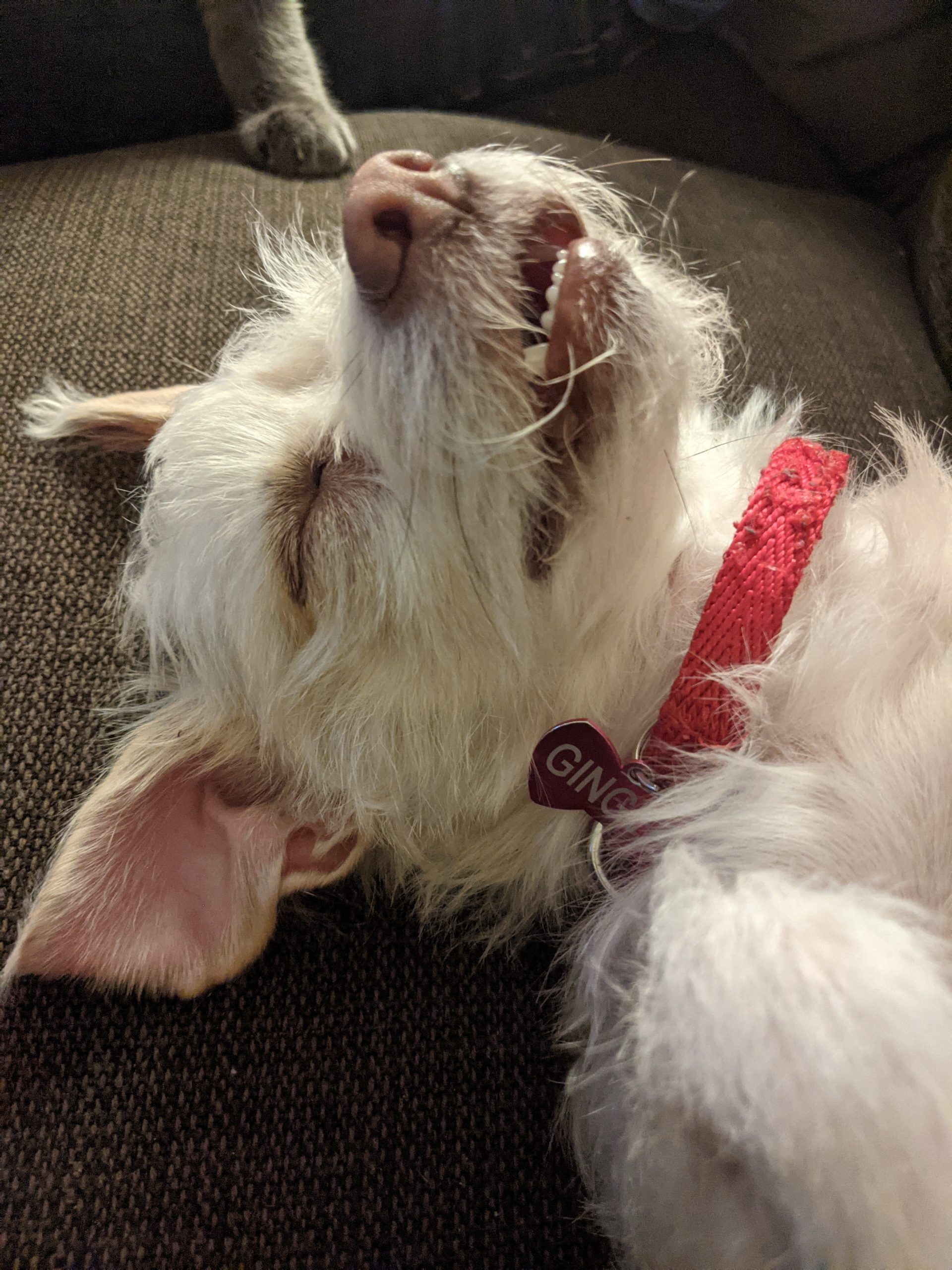 Is there a happy tail in your home? We’re always excited to hear how our former Animal Aid cats and dogs are doing! Email us at contact@animalaidpdx.org with the mews and pupdates, and don’t forget to share a photo or two as well, please and thanks!