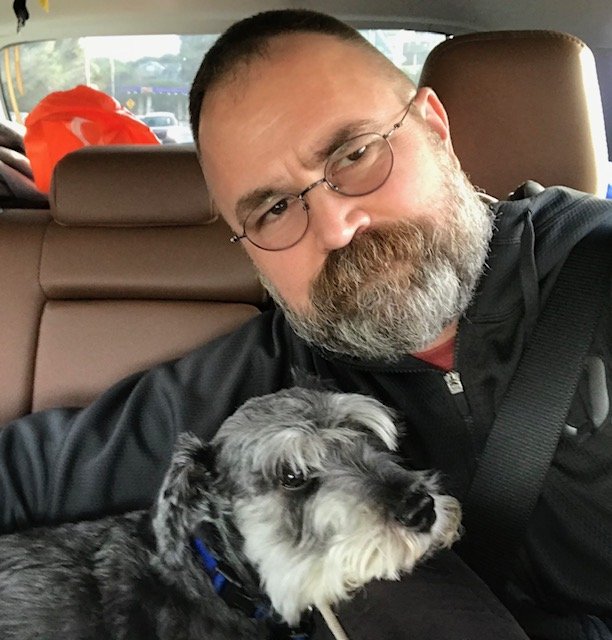 As long as Wade Walter can remember, animals have been a huge part of his life. He grew up on his grandparents’ dairy farm, where all of the animals had names. Any time he found a stray animal, his grandparents let him keep it. So, when Wade decided to volunteer, he naturally gravitated toward an organization that helps animals have a chance at long, healthy, happy lives.

During his search for an organization to help out, he landed on Animal Aid’s website and noticed that “everyone looked happy.”

He immediately felt a connection when he visited the shelter, which is near his home. “Everyone I met was themselves, and everyone had the same mentality about the animals,” he said.

Wade started as a cat caregiver and “catch-all” helper, where he cleaned the shelter, spent time playing with the cats, and helped with small construction projects like building shelves. From there, he became a member of the Facilities Committee. He hopes to return to caregiving again when in-shelter volunteering starts back up.

When Wade talks about his experiences with animals and his work at Animal Aid, his voice is full of passion and enthusiasm. He loves seeing people coming in to volunteer who haven’t had experiences growing up with animals. He also loves seeing young people, seniors, and the disabled come into the shelter and participate without being judged.

“It’s very comforting and relaxing to not have to put on a certain face. You can be yourself,” he said. “The cats will come up and play with you, follow you around, which allows you to have contact and they’ll return the favor. Fifteen minutes in that building, and you’re thinking, ‘I have it pretty good.’ That space just changes your day.”

“It’s not a question of money or where you’re at in your career or life,” he went on to say. “You go to do something positive and leave feeling happy. You have a positive impact on the cats’ lives and that makes you feel better. You can see the rewards there and keep on doing it.”

Wade highly respects Animal Aid’s approach to helping animals with special needs. “They have no problem taking them in and caring for them in the best way possible,” he said. “If there’s an option for them to have a good life—no matter how long they have left—it’s nice that they can be taken care of properly and given the best chance for the future. They’re so quiet about it, and it’s very second-nature to them.”

When Wade isn’t working or volunteering, he plays guitar, listens to music, and “creates things with my hands.” He also loves being outside and spending time with his animals. He has adopted several dogs over the years that came from horrible situations and under his care, “got lazy and comfortable, which is a good sign.”

Barney, Wade’s first foster dog, was afraid to go outside. After a year of encouragement and patience from Wade, Barney finally gained the courage and confidence to be outdoors. Molly, another foster, peed when she was afraid but finally recovered with Wade’s support.

Jayda, one of Wade’s current furry friends that he adopted at three months old, was rescued from a space with 180 dogs inside. She was stunted from not being fed enough food to grow. She’s now seven years old and “getting used to not being afraid of simple things anymore,” he said. Jasper, Wade’s other dog, is protective of Jayda, “but she rules the roost.”

Through volunteering and welcoming companion animals into his home, Wade said, “At least I know I’m doing what I can.”

“Animals don’t have a voice for themselves, so we need to take a step back and help communicate what they need…Take little steps and change one life at a time; it adds up.”

Looking for a way to give back? Become an Animal Aid volunteer! Opportunities include working at the shelter or remotely. Learn more and apply to volunteer.